This is November’s edition of my Iraq SIGACT monitoring and analysis report focused on the south. This month coverage has been extended to Wasit province meaning the report now covers: Basra, Muthanna, Dhi Qar, Maysan, and Wasit. The data collection parameters for recorded incidents are as follows:

> Serious violent crime (e.g. armed car robbery. Violent incidents for which motives are not clear are placed into this category).

> Terrorism (this includes attacks by militia groups and intra-militia violence).

Overall levels of violence in Iraq continue to fall as Islamic State has been driven from its last territorial holdings. On 3 November, the strategic Iraq-Syria border town of al-Qa’im was retaken by Iraqi forces, followed on 17 November by Rawah in northern Anbar province. However, hopes that attention might refocus on solving critical issues in governance and security facing the southern provinces has so far failed to materialise. Here, November saw attempts by local security forces to clamp down on the long-running tribal clashes. However, the exacerbation of underlying negative trends in governance will see security continue to deteriorate over the medium to long term. This month’s report pays particular attention to these governance issues, examining: emergent patterns of dependence on tribes to provide security and social regulation; the acute water crisis affecting the south and its implications for political and physical risk; and major protests which erupted in opposition to proposed reforms of the energy sector. November 2017 recorded 47 total security incidents across the south (Basra: 26; Dhi Qar: 11; Maysan: 1; Muthanna: 3; Wasit: 6). These incidents resulted in 8 killed (Basra: 3; Dhi Qar: 1; Muthanna: 1; and Wasit: 3), and 5 injured (Basra: 2; Dhi Qar: 3).

SIGACT monitoring caught 7 major incidents of tribal fighting in November resulting in 3 killed and 4 injured, mainly in Basra province. This is down from October (11/6/15) reflecting a crackdown by security forces on particular tribes and individuals thought responsible for the ongoing violence. The crackdown attempted to demonstrate that security forces retained the capacity to intervene in tribal fighting following a number of incidents in recent months where police and security forces have turned a blind eye to tribal-based tit-for-tat killings. On 6 November, General Jamil al-Shammari (in charge of Basra Operations), announced the implementation of a plan to tackle tribal fighting and the arrest of 15 men accused of engaging in fighting between tribes in recent weeks. This was followed later on 18 November by significant police raids, in coordination with intelligence operations, in al-Qurnah (north of Basra). Six arrests were made of men accused of instigating tribal conflict in al-Sharish, al-Hamdawi, and al-Karim districts.

On the same day, security forces raided houses in the 5 Mile district in northern Basra City, arresting two on similar charges of inciting tribal violence. However, the drop in tribal fighting SIGACTS in November should be treated with caution since some of the conflicts between the tribes have now involved sustained campaigns of violence with individual incidents going unreported. Local media and government officials are also reluctant to name names when it comes to reporting or issuing public statements addressing the issue for fear of reprisals (indicating the limits of their capacity to address the problem). For instance, in northern Basra the al-Karamsha, al-Subeeh, and Mayah tribes are most likely key actors in a long-running episode of tribal conflict, although this has been not been publicly stated.

Location of 5 Mile district in northern Basra City the area of some of the most protracted tribal fighting exchanges.

The longer-term prospects for a more stable security environment are being negatively impacted by developments in local governance. In September, I reported on how local administration in al-Islah, a small town east of Nasiriyah, had announced it was resorting to employing tribal forces to compensate for the lack of local policemen. In November, a similar pattern of reliance on tribal entities to plug gaps in security provision emerged in Wasit province, this time on a more significant scale. On 16 November, the Wasit Office of al-Hashd al-Sha’bi announced the formation of a tribal council to “strengthen social and security stability in the province”. This tribal body, coordinating with the Hashd al-Sha’bi Office, will be empowered to “intervene in all aspects of life and resolve societal and tribal disputes”. The empowerment of tribal entities within such parallel governance structures poses a serious risk to the development of effective local governance and its ability to curb tribal fighting and other illicit practices in which tribes engage (see last month’s report: Tribal violence and threats to oil facilities and workers). The 16 November statement indicates an empowerment of tribal structures, not just to plug gaps in security forces but to engage in legal governance and social regulation and service provision.

November saw a significant escalation in a water shortage crisis affecting southern Iraq. This led to political tensions between provinces over water usage quotas and warnings over the effects of the shortage on tribal conflict, mass migration, and health. The Tigris and Euphrates constitute 98% of Iraq’s water needs. In the south, the al-Gharaf river (an ancient canal connecting the Tigris with the Euphrates east of Nasiriyah) is also an essential component of the region’s water resources infrastructure. A combination of environmental and governance factors combined to leave downstream provinces vulnerable to shortages in drinking and agricultural water.

On 5 November, it was announced that 19 water extraction projects, generating nearly all the water supply in northern Dhi Qar province, had stopped operations because of the water crisis. The main areas affected were: al-Rifa’i; al-Duwaya; al-Gharaf, Sid Dakhil, Qala’ Sukr and Fajir. The local water administration was working on delivering drinking water to these areas by car. The Qaimaqam of al-Islah, ‘Ali Hussein, said the area was suffering a “true water crisis” after its supply shrank from 20 to just 2 cubic meters. High levels of pollution in the Euphrates made drawing water there more difficult, putting extra pressure on vanishing resources available from the Tigris and al-Gharaf rivers. On 7 November, the farmers’ union in al-Qurnah called on the local government to urgently intervene to save livestock from the drought affecting agricultural lands north of Basra. Some reports stated that available agricultural land had shrunk by 55%. Areas particularly affected were: al-Thugir; al-Juabir; and Humayun. On 16 November Dhi Qar warned of mass migration from the province’s marshlands with the water buffalo herders heading west in order to protect their livestock. The deputy head of the committee with oversight of the marshes, Hassan al-Asadi, stated that there were very serious consequences for the stability of the local population and attributed the crisis, in part, to a lack of stored water supply. He revealed the levels of the water reserves had fallen 35%. Muthanna, Maysan, and Wasit provinces have also been seriously impacted by the crisis. 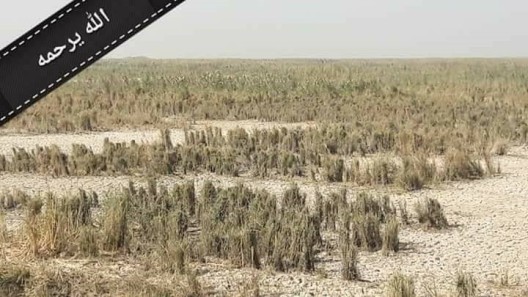 Pictures shared by Maysan News of the effects of the water crisis on the province’s marsh lands.

The water crisis sparked political tensions between provinces as they accused each other of exceeding water usage allocations and thereby depriving those downstream of access. Dhi Qar accused Muthanna and Wasit of exceeding their allocations. For its part, Muthanna stated the responsibility lay with Babil and al-Diwaniya. Various legal threats were exchanged between provinces and calls were made for urgent intervention by the federal government. The crisis sparked numerous incidents of protest in affected areas across the south. For instance, on 19 November tribes of al-Azirj protested at the northern entrance to Dhi Qar province claiming that drinking and agricultural water had been cut off for two months. Wasit, Dhi Qar, and Muthanna all issued warnings about the effects of the water crisis on tribal conflict as competition over scarce resources intensifies. Muthanna’s governor, Faleh al-Ziyadi, warned that he had received information that tribal forces were mobilising to “ensure the arrival of the water allocation agreed upon by the provinces”. The water crisis highlights the interlocking dynamics of environmental and governance factors as drivers of political and physical risk in southern Iraq.

The weakness of governance in the south was further revealed in November as local political and administrative bodies risked being overwhelmed by mass protests in response to reforms of the electricity sector. These rmeasures form a central part of Prime Minister Haider al-‘Abadi’s economic reform agenda and are intended to reduce subsidies, waste and overuse of supply. The spate of protest incidents connected to electricity sector reform, combined with those responding to the water crisis, resulted in 20 significant protest incidents during November (compared with 13 in October, and 9 in August). Most of these incidents were concentrated in the second half of the month giving rise to a general sense of spiralling political chaos across the south heading into December. Some of these demonstrations, such as on 24 November in Nasiriyah, brought thousands to the streets. Several protests turned violent, involving attacks on local government buildings and personnel. On 24 November, about 250 protesters broke off from the demonstrations in Nasiriyah and attempted to storm the home of the provincial governor, military units were deployed to protect him. On 28 November, angry crowds in Basra’s al-Juniyah neighbourhood attacked the electricity distribution manager, Muhammad ‘Abd al-Amir al-Helifi, during a meeting to discuss the reform proposals. Al-Helfi had to be extracted by Iraqi security forces. Protests in al-Juniyah had been intensifying throughout the week. By the end of November, Basra’s Electricity Distribution Manager, ‘Abd al-Karim al-Nijar, had resigned and a number of provinces were backing away from the reforms. The inability of southern provinces to replicate what is being done in other parts of Iraq, such as Baghdad, in terms of energy sector reform is further evidence of how weak local governance is contributing to a sense of drift towards political breakdown in the south.

The beauty of Tolkien

Capturing the most beautiful lines in Tolkien's legendarium

A Project of Liberty Fund

Inside the lands between

Observations on social movements in Iraq

Spotting Ripples and Trends in the Middle East